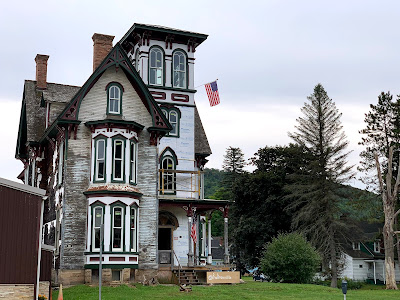 People always say that location is key and that is certainly true for our incredible house.

For those of you who are not familiar with the house’s location it is on nostalgia inducing Main Street in the small town of Coudersport, Pennsylvania. The Allegheny River runs along the side of the house but so early in the river's existence that the size of the waterway, like the town, is quite small. The closest major city is not even in Pennsylvania but can be found about two hours North in New York.

Unaffected by urban sprawl, the town has developed slowly.  Looking out a second story window you can see the classic marquee of the local movie theater. Strolling down Main Street you will pass by historic brick buildings of a bygone era. Many of these buildings were constructed soon after the house, when the area was bustling with logging activity. As the trees disappeared so did the town's need to grow. It allowed for the town's architectural development to become frozen in time. Sitting on a park bench in the courthouse square you can feel yourself pulled back to a time when we would enjoy the greenery around us rather than the screens in our hands.

If the house had been a rapidly developing city, I’m doubtful that it would still exist. Supposedly Franklin W. Knox found his inspiration for the home on a trip to Pittsburgh. I’ve often wondered if the house he admired was similar in stature to the one he had built. I’ve tried to find the possible source of his inspiration but to no avail. Maybe it was just a similar style house but not on as a grand a scale that I’ve overlooked. I also think there is a good chance that the house of inspiration no longer exists.

With progress comes sacrifice and often those sacrifices are buildings that no longer fit in the modern world. I’ve noticed this in my own hometown where farmhouses are being buried so warehouses can grow. Our society no longer shops on Main Street but online. Instead of having a back store room of a modest selection of popular goods we have warehouses full of an infinite number of items to fill our homes.

If our house had been in a large field near a shipping hub, it would probably only be a memory. If downtown Coudersport had grown quickly, the house with its large yard may have been replaced with an office building or hotel. Luckily for us, the location allowed for the house to be preserved.
In the name of progress we are often far too quick to erase what makes an area unique. Small towns like Coudersport are invaluable. These little towns are full of gems that are only getting rarer as time passes. Hopefully more people will start to see the value in our small towns and realize that progress isn’t always for the best.

October 09, 2020
Coudersport may be a small town, but the number of old houses is certainly grand. Here is an autumn look at a small sampling of Coudersport's other historic homes which are all within walking distance of the F. W. Knox Villa.  Issac Benson House/Coudersport Consistory The Lewis Mansion
1 comment
Read more