“A Trip to the Mountains” 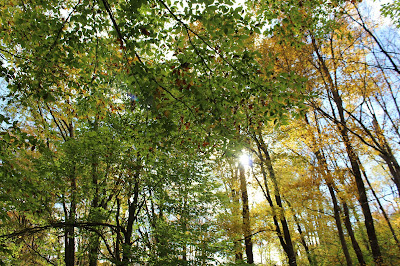 "A trip to the mountains". That phrase meant something different when I was eight. Back then, I would be glancing at the clock from a  tiny desk, waiting for the hands to strike the number three. Now I illuminate my smart watch, waiting for 5:00 to stand out on the screen while rolling back in my chair.

Then there is the part that didn’t change. I carry my bags out to the car and buckle my seat belt. I begin chatting about my day to help eat away at the long drive that will take us from highways to an overly bumpy dirt road. After hours in the car, I stretch my legs and breathe in the refreshing air. The apple trees are still there, maybe a little more gnarled and not bent in quite the same position. I found myself surrounded by green, my favorite color, which quickly disappears as the sun sets, giving way to an unbelievably dark and sparkling sky. It’s like nothing has changed, but that is not the truth.

Everything is different now. When I wake up, I won’t be outside searching for salamanders or lagging behind while the boys ride bikes up and down the dusty road. Rather than exploring the wilderness after a heaping breakfast of French toast, I will be going to town and spending my day amongst the trees that were removed from the same woods over 140 years ago and repurposed into 2x4’s. I’m obviously not the one who had those trees cut down, but whoever is responsible for that is indirectly responsible for the change in my mountain visits.

But really, it’s my fault that the mountains changed. Just because someone assembled those logs into a house didn’t mean that my life needed to change, that house was already there when I was eight. I looked at that house every time we drove through town to get to the Kinzua. However, I never really saw it, that pale old house was like a ghost that I just looked straight through.  The real issue occurred when I was finally able to see it. Once the house became illuminated, I knew that I couldn’t let it go. It was just as impressive to me as the glittering night sky and I was quickly convinced that I could get it to shine again.

In that moment, I changed the future of my trips to the mountains. Instead of shuffling through leaves, I would be shuffling through dust. The most viewed wildlife of theweekend would change from deer to pigeons. Dinner was no longer at 6 PM with a trip into town for ice cream before 8 PM. Dinner would now be at 8 PM after a full day spent in town. The mountains became a town. Instead of a hot dog over the fire at lunch, we had sandwiches served by a waitress. The cabin became a stop rather than the destination. Instead of following paths through the wilderness, I follow my dad while holding a clipboard to take down measurements.

I didn’t realize that this house would change my trips to the mountains so much. Thinking about it now, that should have been glaringly obvious. At times I really miss the long relaxing dinners we would have at the cabin with plenty of time for stories before everyone was ready for bed. I took for granted that I could always pack as much as I wanted into the truck, now I’m always checking if there is space amongst the corner posts and corbels for an extra item. We no longer spend our days out on the water at the Kinzua or driving to Benezette to look at the elk. The mountains are nolonger just a vacation. There is always something to work on at the house and even if it’s not urgent I don’t think it would be possible to visit without furthering our progress.

Honestly, I’m glad that I didn’t know how much things would change. It’s certainly upset me at times but it would not be at all worth giving up on the house to get those things back. I’ve been able to create wonderful new mountain visit experiences because of it. I’ve loved our occasional dinners in the tower, even if carrying a cooler all the way up the spiraling stairs wasn’t the best of ideas. I’ve loved sitting out on the roof and just enjoying the incredible view. I also know that without this house, I never would have temporarily moved to an extremely small town and meet some absolutely wonderful friends.

I’ve mentioned before that my best advice for someone who wants to take on an old house is to find a project you absolutely love. If I didn’t love this project, I would not have been okay with giving up my former mountain trips. It’s certainly tough to accept that things will never be the same but in this case, I feel like the changes were worth it. We will always miss parts of our past but we can’t let that keep us from pursuing a new kind of future. I know that the mountain trips of my childhood actually stopped long before we got the house, if anything the house gave me a reason to keep returning to the mountains.